2 Million Gospels of John urgently requested for Russia and Ukraine 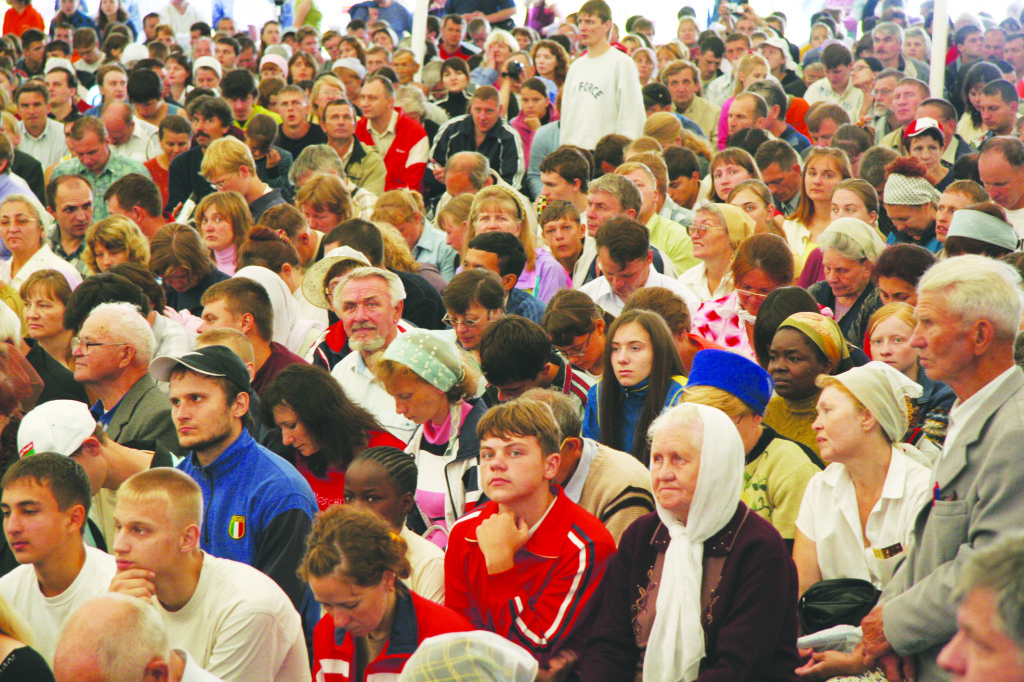 Dear Friend, It always thrills us to hear of testimonies past and present of how God is using the literature in the salvation of souls. In the past month two people have told of their conversions in the 1960s through Every Home Crusade tracts. One was a lady who received a tract at a band parade in Rathfriland, was convicted and converted and still has that tract to this day.  The other was a man who received the tract “Heaven our Home”, was challenged by the title and message, sought forgiveness of sins and he too has the tract kept in his Bible. We appreciate all your help with this ministry and truly only Heaven will reveal all those who have been won to Christ through God’s blessing on this work of Gospel literature distribution.
On 3rd April we sent 11 pallets of literature to Mr Paul Williams who is working in Romania. He received 120,000 Gospels of John, 150,000 of the booklet “Let Him In” by Noel Grant in the Romanian language, and 600,000 Gospel Tracts. This literature will be distributed during his Gospel tent campaigns during the summer months.
On 3rd April we shipped a container to Diguna Mission in Kenya. In this container we included around 200,000 of the Bible Educational Service booklets. We also included a supply of Gospels of John, Scripture booklets, Gospel tracts and Children’s Bible Lessons for several ministries.
On 8th April we shipped a container to Bro. Juan Sanchez who leads a mission in the Dominican Republic. We also included in this container a consignment of literature for Child Evangelism Fellowship.
On 9th April we shipped an 18 Tonne container load of literature to our friends in India Bible Literature. These friends are constantly asking for an increase in the amount of literature that we send to India.
On 10th April we shipped a container to Judea Harvest in South Africa. They have a ministry all over Southern African countries. In this container we sent around 30,000 Wondrous Love book by D.L. Moody, 30,000 Necessity of Prayer book by E.M. Bounds, and 30,000 Weighed in the Balances book by D. L Moody. These books are being printed and sent as part of the Revival Publishing side of the ministry. The books will be distributed during a very large Pastors conference which will be held at the end of June. We also included 60,000 Meet the King booklets and some Flashcard Bible lessons for CEF.
On 30th April we sent 50,000 Gospels, 50,000 Meet the King booklets and 50,000 letters to 9 churches in Belgium.  This literature is all in the French language. Each home in their area will receive a copy of each item. This has been organised by Child Evangelism Fellowship as part of a similar outreach in France.

Dear Brother Samuel, I want to greet you in the name of our Lord Jesus Christ. In the past we have received from your printing house 2 containers of Gospels of John which have been distributed in the former Soviet Union. We want to thank you for your generosity.
In the last months we have all seen the situation in Ukraine escalating. Not only those in Ukraine but people are watching all over Europe to see what is to come. So much uncertainty and so many dark clouds have appeared over our continent. People are looking for hope in many directions. One is looking towards Russia, another towards EU while others are hoping that NATO will bring help. We know that none of these great powers can bring the peace and hope that people are desperate for. Only the Lord Jesus Christ gives the hope that is not dependent on circumstances.
This hope that Christ gives is not wishful dreaming but it is real hope that brings solutions that will last not only in this time but for all eternity. This hope can only be found in the Gospel of Christ and nowhere else. Therefore we firmly believe in spreading the Good News while we still have the day.
We as Finnish Lutheran Mission, (known as the Folks Mission), OM Finland and Christliches Hilfswerk TABEA e.v. Germany are asking if you would kindly take into consideration our request for Gospels. We have a long history in the former Soviet Union and Eastern Europe before the wall came down and we have continued to work with literature until today. In spite of all the uncertainty, we want to continue our literature work as the Lord continues to open the doors before us. If you would be able to produce a full container load of Gospels for us, it would be great.
Now is the time to work. One day the Lord Jesus Christ will return in His glory and I am looking forward to that day when we will meet before His Throne and see all those brothers and sisters who came to know Jesus through the printed Word that you have so faithfully printed and sent around the world.
Thank you for considering our request. May the Lord continue to bless your work and provide all that you need in order to serve Him and His people.  Yours in Christ, Esko Mäki-Soini: OM Finland. Tapani Kaitainen: Finnish Folks Mission. Waldemar Duck: TABEA .

Paul Hagelgans of Bibel Mission writes – “Russia – returning again to cold war? A question asked not only by politicians but of many people. Believers, Christians, being concerned, ask: what  does that mean for the Gospel? Indeed, over the past months, these and many other questions have been moving the hearts and minds of millions of people… However, in this letter, we want to show the other side, in particular, how God is using these circumstances for the  Gospel to continue to be spread!
For many years now, Revival Movement Association has been equipping our ministry in Russia by providing hundreds of thousands of Gospels of John and other Gospel literature. Equipped with them, thousands of evangelical churches and tens of thousands of believers went to the people sharing the Gospel and their testimony of faith, and bringing them the printed Word of God.  It is always a joy to see how the Gospel is pulling out people from the darkness of death, as they are being born again to new life and given hope!
We need 1,000,000 Gospels of John immediately for a huge outreach programme that is commencing immediately in Russia. Then we will need a further 600,000 Gospels our 1:10 project later in the year.
One Testimony – “Recently our team went to Srednesibirskoye town of Altay region.
In one house we were greeted by a friendly young woman. She listened to us with her eyes and heart wide open. In the conversation we found out that she and her husband were very interested in Christianity and even tried to read the Bible, but not understanding much, they put it aside. The miracle of salvation and soul transformation happened right in front of our eyes. While we were praying, the young woman’s father, Nickolay, came in. He was very glad to see us, because he was searching the truth as well, but
couldn’t find what he needed. When we offered him to pray and repent to God, he willingly agreed. After the sinner’s prayer with tears he said, “It is so wonderful to talk with you! All day long, I will be learning about everything.” Something amazing was going on in
that house, as if His Love was pouring down straight from Heaven. These people’s joy was so great and sincere, that we all were amazed!”
The team of the New Life Church, Barnaul.”
But! But God! He continues what He has begun! And He doesn’t stop before His work is completed! This year, we experienced something special! I don’t know if this is because of the prayers of thousands of Christians around the world praying for Russia, or because God just formed conditions for a spiritual seeking in the hearts of the people living in Russia… perhaps both. But this year, we had a special growing demand (seven times higher than before) for Gospels and Gospel literature. We distributed everything we had in stock  (Over 3 Container loads) and were still able to meet only one small part of the need and the requests we received from churches and believers.
What do we see? No matter what politicians decide or what people and society think – God continues His work, and the people of Russia need Christ now more than ever before, the Christ they can read about and meet in the living Gospel. Again, God gives you and me the opportunity of becoming participants of His great work – of reaching the people of Russia with the Gospel. Each of your prayers and each of your contributions will become your greatest input! The victory is always with the Gospel.  Paul Hagelgans,  Bibel Mission. 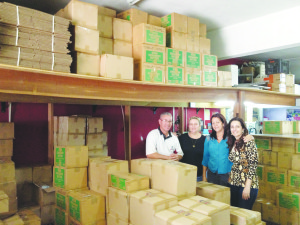 REVIVAL MOVEMENT ASSOCIATION
10 YEARS OF BLESSINGS IN BRAZIL!
Interlink Missionary Agency – the branch of Revival Movement Association in Brazil – has celebrated its 10th anniversary on April 26th. Interlink was founded in April 26th 2004 by Victor Cardoo who passed away in 2012.
Many  local leaders, church members, missionaries and evangelists were invited for fellowship that started with a lovely breakfast and concluded with a thanksgiving service held at Central Christian Evangelical Church in São José dos Campos, São Paulo, Brazil. 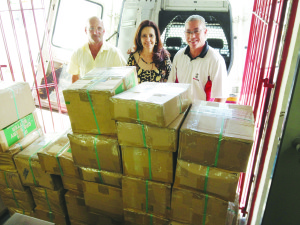 Sueli Crawford (Interlink director), Pr. Cleveson Damasceno (local Baptist minister and member of Interlink board) and Aramis DeBarros (Interlink publishing co-ordinator) spoke during the thanksgiving service and showed the people some of those impressive figures involving Interlink ministry in Brazil. Samuel Adams from Revival Movement Association was present at the celebration. Samuel introduced the audience to Revival Movement ministry by sharing with the people some testimonies and figures involving Revival Movement’s world wide ministry of Gospel literature distribution. 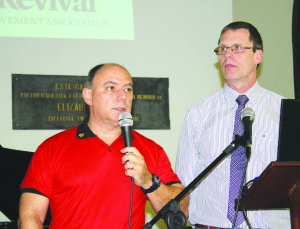 On the next day, a Sunday morning, Interlink and Revival Movement were invited to share a message on their ministry during the Sunday morning service to the members of the Central Evangelical Christian Church, which is one of the most influential Christian congregations in the city. Brother Samuel Adams, through a presentation showing recent literature distribution in Africa, Russia, Mexico and to the Chinese people, once again was able to explain to the congregation how Revival Movement conducts its ministry and distributes large volumes of Gospel literature around the world. After the service, some church members were so deeply touched that they immediately contacted Sueli Crawford from Interlink to see how they could be of some help for the missionary work. 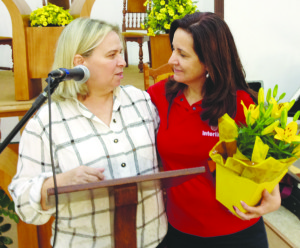 During this 10-year period of operations in Brazil, Revival Movement has blessed Interlink with 36 containers  filled with quality Bible literature. This amount means about 740 tonnes and an estimated 150,000,000 items of literature, being Gospels of John, Gospel booklets, books, tracts or children’s  Bible Lessons. This volume of literature has become a powerful evangelistic tool for over 13,000 churches and evangelists all around this immense South American country. 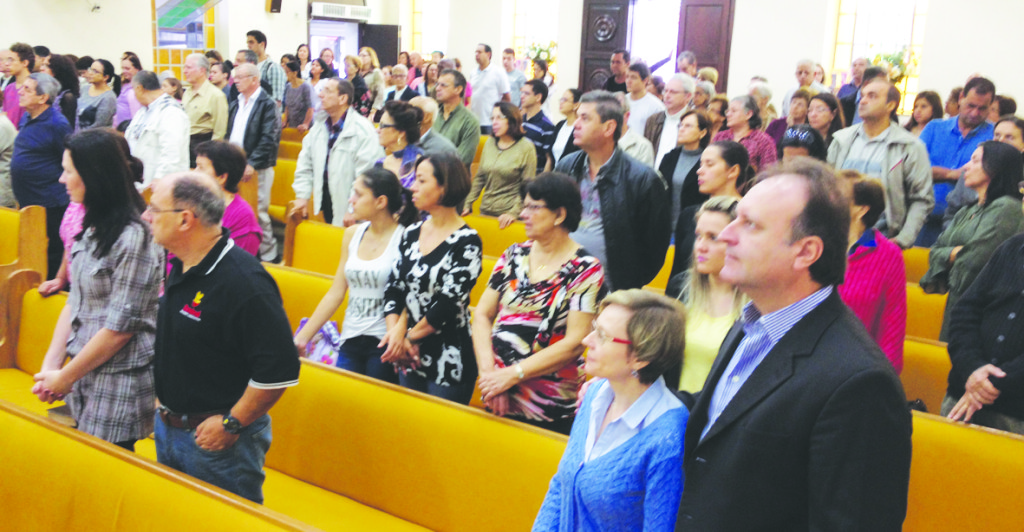 The Work of God in Brazil has been tremendously impacted by the Gospel literature which Revival Movement has sent to Interlink. We feel very thankful for that. From North to South we receive testimonies of people being saved and restored through the distribution of our literature.The quality and availability of the tracts and booklets have indeed helped so many Christians to reach out to the lost souls in Brazil  –  Aramis DeBarros from Interlink.